GALEX has been performing a variety of imaging and spectroscopic surveys of different depths and sky coverage. The spectroscopic surveys have been concluded although occasional spectroscopic observations are still being taken. This chapter briefly summarizes the data available from GALEX. Lists of fields that have been released publicly are available from the Mikulski Archive for Space Telescopes (MAST). Please check the GALEX MAST web site for the most up-to-date information about which GALEX data have been released.

GALEX was launched by a Pegasus-XL vehicle on 2003 April 28 into a 690km altitude, 29 degree inclination, circular orbit with a 98.6 minute period. Over most of the time since the launch of GALEX until May 2009, GALEX obtained imaging and spectroscopic observations in two ultraviolet bands, a Far UV (FUV) band spanning 1350-1780Å and a Near UV (NUV) band covering 1770-2730Å. The FUV detector has remained off since May 2009 and currently only NUV data are being taken. When the FUV detector was still observing, the instrument provided simultaneous co-aligned FUV and NUV images. The spatial resolutions are 4.3 and 5.3 arcseconds (FWHM) in the FUV and NUV, respectively. The grism mode provides low resolution spectra (R(FUV) = 200 and R(NUV) = 90) of all objects in the field of view. Details of the performance of the instrument and detectors can be found in Morrissey et al. (2007 ApJS, 173, 682) and the summary in Chapter 1. The projected orbit lifetime is more then 25 years. There are no consumables on board. The spacecraft is stabilized along three axes with selective redundancy in the gyros and reaction wheels.

Science data are only collected on the night side of the orbit with the instrument boresite pointing at the science target and performing a spiral dither motion of 1.5 arcminute in diameter. This is done to reduce detector fatigue by bright stars. On the day side of each orbit the spacecraft is aligned with solar panels oriented toward the Sun and the instrument boresite pointed away from the Earth (see Figure 1). 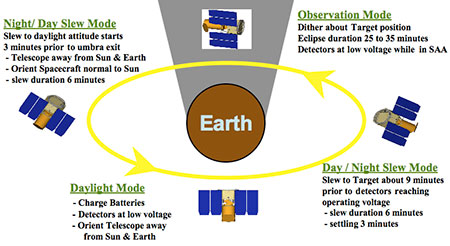 The available time for science exposures on the night side ranges from 15 to 28 minutes. The voltage level on the NUV detector is ramped to low values during the day side of each orbit to protect the detector from damage. The detector is also held at low voltage during spacecraft passages through the South Atlantic Anomaly (SAA). When this occurs on the night side of an orbit the exposure times are reduced (see Figure 2), occasionally causing no exposure to be taken. When the FUV detector was still observing, both detector voltages were generally turned on and off at the same time. 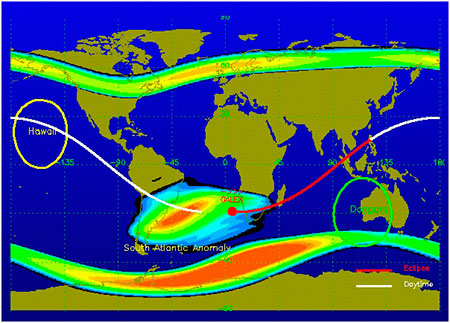 GALEX typically downlinks 3.2GB of photon data and telemetry every day. The data is transmitted from the ground stations, operated by Universal Space Networks, arriving at the Science Operations Center at Caltech within 8 hours of each contact. Upon arrival, the raw telemetry files are automatically ingested by a software pipeline that extracts housekeeping telemetry, which is trended to monitor the health of the spacecraft and the science instrument. The pipeline processing of the raw time tagged photon event telemetry is described in Chapter 3.

The science goals of the GALEX mission are achieved with a series of nested surveys. Observations of many survey types are made each day (14 to 15 eclipses), although only one survey type can be assigned to each eclipse. The three main imaging surveys are the All-Sky, Medium, and Deep surveys. Below is a table showing the sky coverage and approximate depth of these surveys including data released as a part of GR6. Note that the exposure time and sky background level vary significantly within each survey which result in corresponding variations in the depth of each survey as a function of position on the sky. These totals include some data originally taken as a part of other smaller surveys targeting nearby galaxies as well as the various guest investigator targets that have observations falling within the exposure time limits listed in the table.

The sky background maps in Galactic coordinates for the all-sky and medium imaging surveys are shown in Figures 3-6 to illustrate the sky coverage available in the GR6 data release. The numerous gaps in the sky coverage of the all-sky survey are due to the Galactic plane, bright stars, and other high count rate sources such as the Magellanic Clouds. These areas were avoided in order to prevent damage to the detectors. After the GR6 release the bright star and total field count rate limits were significantly increased and GALEX is currently filling in many of these gaps with new observations. The medium imaging data mainly target regions that were a part of the Sloan Digital Sky Survey, the Two Degree Field Redshift Survey, the WiggleZ survey, and many other smaller surveys targeting various individual sources of interest. 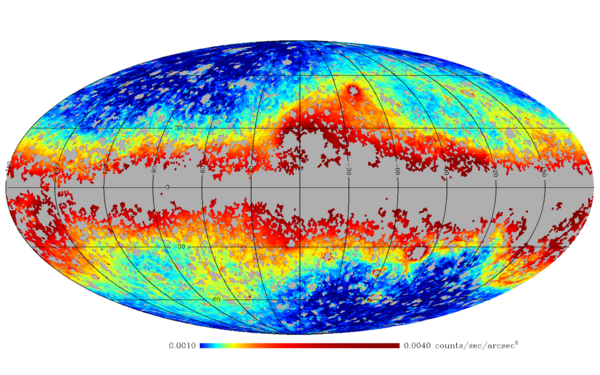 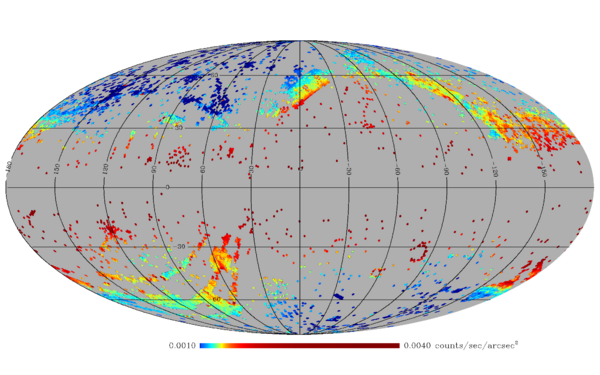 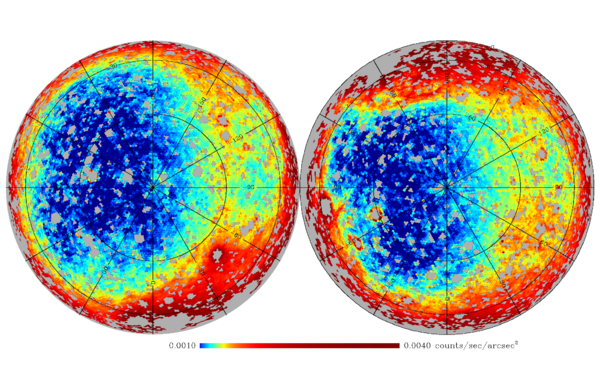 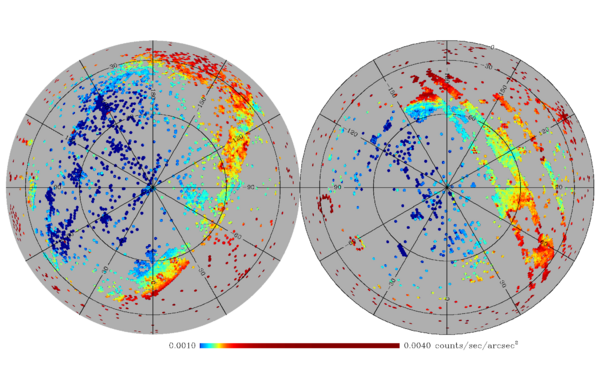 In addition to the Medium and All-Sky Imaging Surveys mentioned above, there were various other imaging surveys performed by GALEX. A few of them are described below.

Deep Imaging Survey (DIS) - Areas with total exposure times over 10,000 sec cover 365 square degrees as of the GR6 data release. Targets are chosen to have extensive corollary data from other large surveys such as COSMOS, DEEP and ELAIS, among others. Some of the fields have substantially more than 10,000 seconds of exposure time.

Nearby Galaxy Survey (NGS) - This is a survey targeting nearby galaxies with a nominal exposure time of 1000s to 1500s. Note that some fields have significantly more exposure time. The core of the NGS targets the 71 galaxies included in the Spitzer Nearby Galaxies Survey (SINGS). However, the sample also includes a variety of nearby galaxies, typically included due to existing or planned data at other wavelengths. Thus, the NGS is not a statistically representative sample of the galaxies in the local universe.

Calibration Imaging (CAI) - GALEX has observed several white dwarf standards for the purposes of calibration. These are taken from the list in Bohlin (1996, AJ, 111, 1743). With the exception of the white dwarf LDS749B, all of these stars are saturated in the GALEX images and are not useful for calibration. The GALEX absolute calibration rests solely on observations of LDS749B although it is mildly saturated on some locations of the detector. (More information on the GALEX photometric calibration can be found in Chapter 1).

In addition to the imaging data, there is a limited amount of spectroscopic data available. The original plan for the spectroscopic surveys was similar to that for the imaging, with shallow exposures covering large areas and progressively deeper exposures targeting smaller solid angles. However, as the mission progressed, the decision was made to only continue with the Medium Spectroscopic Survey. The Medium Spectroscopic Survey (MSS) consists of spectroscopic observations with an exposure goal of 150,000s covering 5 square degrees of the fields observed as a part of the Deep Imaging Survey. The Calibration Spectroscopy Survey (CAS) consists of observations of several white dwarf standards useful for the purposes of calibration. In contrast to the imaging, most of these standards are not saturated in spectroscopy.

GALEX has been the only SMEX to offer a Guest Investigator Program (GIP). There were six proposal cycles from 2005 to 2010. All of the guest investigator data that have passed our quality assurance tests have been reprocessed with the most up-to-date GALEX pipeline and calibration and included in the GR6 data release. For questions about the Guest Investigator Program please contact galexgi.gsfc.nasa.gov. More information can also be found at the GALEX GI site at the Goddard Space Flight Center: http://galexgi.gsfc.nasa.gov.

The GALEX satellite operates in a largely autonomous way, with observing plans typically uploaded weekly. The major observational constraints that GALEX follows are summarized below.